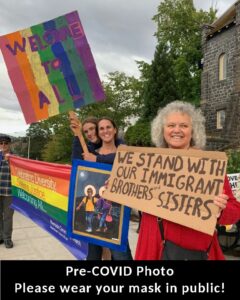 My name is Tina Castañares.   I live in the Odell area and have lived and worked in the Mid-Columbia for 36 years. I believe in nonviolence, justice, equity, internationalism, interdependence, a world without restrictive borders.  And I believe in peace.

[August 6th and 9th] were the 75th anniversaries of the bombing of Hiroshima and Nagasaki by American forces. One of the broadcasts I heard over the weekend made the same assertion I’d always heard growing up, and that you probably have heard all your lives, too:  that these bombings were necessary to save lives, and that they were what ended the Second World War in the Pacific (the war in Europe had already ended).

Between 140,000 and 300,000 Japanese women, children, and the men who were not away in the military, were killed in these bombings, other tens of thousands terribly inured, and those with genetic defects and cancers may never be fully counted.

Given the historical records now available to us, it completely floors me that this message –of the necessity of the bombings —  is still being taught.  I would like to read the words of a few military leaders of the day before I turn to the question of how nuclear bombs relate to racial justice.

Adm. William Leahy, Truman’s chief of staff, wrote in his 1950 memoir:
blockquote>The use of this barbarous weapon at Hiroshima and Nagasaki was of no material assistance in our war against Japan. The Japanese were already defeated and ready to surrender.… In being the first to use it, we…adopted an ethical standard common to the barbarians of the Dark Ages. I was not taught to make war in that fashion, and wars cannot be won by destroying women and children.

Adm. William Halsey Jr., the commander of the US Third Fleet, stated publicly in 1946 that “the first atomic bomb was an unnecessary experiment…. It was a mistake to ever drop it…. [The scientists] had this toy, and they wanted to try it out, so they dropped it…”

Gen. Dwight D. Eisenhower stated in his memoirs that when notified by Secretary of War Henry Stimson of the decision to use atomic weapons, “I voiced to him my grave misgivings, … on the basis of my belief that Japan was already defeated and that dropping the bomb was completely unnecessary…” He later publicly declared, “It wasn’t necessary to hit them with that awful thing.”

Even the famous hawk General Curtis LeMay, the head of the Twenty-First Bomber Command, went public the month after the bombing, telling the press that “the atomic bomb had nothing to do with the end of the war at all.”

I have quoted from and will read a bit more from THE NATION Magazine in 2015 and the BULLETIN OF THE ATOMIC SCIENTISTS’ issue from just this month.  “The record is quite clear: From the perspective of an overwhelming number of key contemporary leaders in the US military, the dropping of atomic bombs on Hiroshima and Nagasaki was not a matter of military necessity.”

And not only thesemilitaryleaders opposed or later regretted the use of atomic weaponry against Japanese cities.  Many scientists, including some of those who led the development of nuclear bombs, petitioned the government to merely demonstrate the power of the A-bomb to Japan and Russia, without using it against civilian targets. Their petition was addressed to President Truman but was never delivered to him or to the Secretary of War.

The stories behind all of this are complex and detailed, and I won’t try to share more about them with you now…because I want to bring these acts of state violence back to the subject of racial injustice.

Just as the killings of George Floyd, Breanna Taylor, Trayvon Martin, and many others whom we remember and honor today were perpetrated against defenseless victims – let me repeat for emphasis, against people who had no ability to defend themselves – the bombings of Hiroshima with a civilian population of 300,000 and of Nagasaki with a civilian population of 250,000 were perpetrated in the air above that many people who were defenseless. As put by The Bulletin of Atomic Scientists, “The bombings of Hiroshima and Nagasaki initiated an era in which—for the first time on Earth and now continuing for seven and a half decades—humankind collectively and summarily lost the right to self-defense.”

Thankfully, not everyone here on the home front at the time justified or praised the action:  “When Americans first learned that the people of Hiroshima and Nagasaki had been collectively vaporized in less time than it takes for the heart to beat, many cheered. But not all. Black poet Langston Hughes at once recognized the moral depravity of executing [over] 100,000 people and discerned racism as the phenomenon that had licensed the depravity. Black journalist George Schuyler wrote: “… the country, in its ‘racial arrogance’, has ‘achieved the supreme triumph of being able to slaughter whole cities at a time.’ Still within the first year after the bombings, black novelist and anthropologist Zora Neale Hurston “denounced the US president as a ‘butcher’ and scorned the public’s silent compliance, asking, ‘Is it that we are so devoted to a ‘good Massa’ that we feel we ought not to even protest such crimes?’ Silence—whether practiced by whites or people of color—was, she saw, a cowardly act of moral enslavement to a white supremacist.”

So today, nuclear war capability and the nuclear arms race are jolting forward again.  Our country has elected to abandon major treaties to reduce nuclear arsenals and testing.  Now certainly this is a huge threat to people of all races.   But so far no atomic or hydrogen bombs have been used, tested or threatened by our nation against majority-white regions.

First-strikes with nuclear weapons have been contemplated or threatened by our nation only against these countries:  North Korea, North Vietnam, China and Iraq.  In addition, we have called only these countries immoral or “evil” for suspected development of nuclear weapons:  Iran, Iraq, Libya, and North Korea — not Russia, not England, not France, not Germany, not Israel.  We have vilified Iran, Iraq, Libya, North Korea, China, and Pakistan for not complying with the Nuclear Nonproliferation Treaty, even though we ourselves have violated that treaty for over 50 years

And very importantly, where have we TESTED our nuclear weapons before above-ground testing was outlawed?  In the Marshall Islands, Nevada, and New Mexico.  And what was that like?   “The United States tested 67 high-yield nuclear bombs between 1946 and 1958,” forcing whole islands of Marshallese people to move from their ancestral homes, “exposing many to radioactive fallout and bequeathing exile and ill health to ensuing generations.”  One of the bombs tested was 15 megatons. It’s been calculated that “If their combined explosive power [of those 67 bombs] was parceled evenly over that 12-year period between 1946 and 1958 , it would equal [more than] 1 ½  Hiroshima-size explosions per day.” The Marshallese people today are said to have some of the highest per capita cancer rates of any population.

The picture is not more heartening when one turns to tests carried out on US soil. About 2 weeks before the bombs were dropped on Japan, the A-bomb was tested in New Mexico where the racial distribution downstream “were largely impoverished agricultural families, mostly Hispanic and Native.”<

As in New Mexico, so in Nevada. “A study published in the medical journal, Risk Analysis, concludes, ‘Native Americans residing in a broad region downwind from the Nevada Test Site during the 1950s and 1960s received significant radiation exposures from nuclear weapons testing.'”

There is so much more that can and should be said about racial injustice and war, and about racial injustice and nuclear weapons.   But for today, I want to leave it there, thanking you all for listening.  Just as we must never, ever forget slavery, the Holocaust, and genocides wherever they have occurred, I hope that we never, ever forget the profound significance of our having used these weapons –and the fact that we are still continuing to build more of them.

When we kneel to remember other defenseless victims of state violence, let us also remember and honor the victims of these bombings and tests, 60 to 75 years ago.  They were defenseless civilian people of color who did not deserve to be vaporized or exposed to harmful radiation as they went about the struggles of their daily lives.