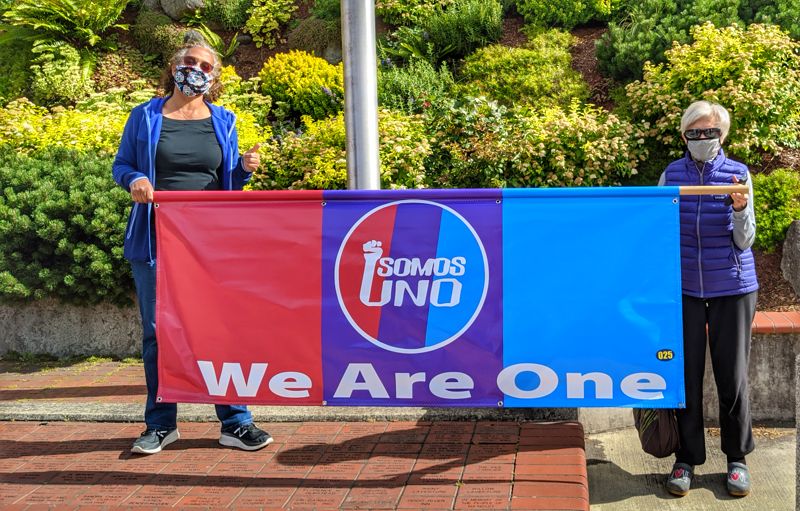 Hello all, my name is Maza and I have lived in Hood River for 6 years. I grew up in The Dalles but I lived in Venezuela for 9 years as a kid. I remember moving back to the US after Venezuela and thinking “I am not racist, I lived abroad.” Or “I am not racist, I have black cousins.” I was blind to my own racism, falling into the “Good Bad Binary” that Robin DeAngelo talks about in the book “White Fragility.” I felt that I was a good person, and loved the brown and black people in my life so I must not be racist.

It has taken me a long time to come around to the fact that the white supremacist society that I was raised in makes it impossible for me not to have inherent biases against people of color.

But this defensive mechanism is the problem. Our unwillingness to engage or our presumption that the problem of racism is for black people to solve and that we can just stand by does not work. In the same way, white women needed white men to give them the right to vote, white people need to be part of the solution to solve problems like police brutality.

During recent years, I have started wading into the waters of race discussions. I have started reading books and let me tell you, it was uncomfortable. I remember reading “So You Want to Talk About Race” by Ijeoma Oluo and crying after almost every single chapter because all the problematic behaviors she describes were ones I was guilty of. I remember the first time I read White Fragility and having to put down the book for several days between pages because I found it so challenging.

In the book, “So You Want to Talk About Race” the author talks about the harmful effects of white women’s tears. Saying that in a race conflict, if a woman starts crying, the attention shifts to comfort the woman and ignores the negative impact of her racial attitudes. I remember reading this and thinking “ What, so I can’t even cry now?” I was frustrated and angry that my own natural reaction could be a source of racism. But then I started learning about race riots and Emmett Till. I learned that in the Tulsa Race Massacre, it was started by a white woman who screamed in an elevator with a black man and it resulted in the death of 36 people and 800 injured. Young Emmett Till was brutally murdered for just being accused of whistling at a white woman. These tragic stories reinforce the points Ijeoma Oluo wrote and reminds me of the power of my own “natural” reactions. Our individual actions are part of the foundation of racism and it hurts white people too. We are unknowingly the perpetrators of countless injustices and it can only be stopped through understanding and action.

To everyone listening, I want to give you about a metaphor that I have found helpful to encourage me to keep having uncomfortable conversations. Take your hands and clasp them together, lacing your fingers like a zipper. Now, unclasp your fingers and with your fingers straight, move one hand one finger distance down. Now reclaps your fingers and hold them that way. How does it feel? A little uncomfortable maybe? Like something isn’t quite sitting, right? That is the feeling we all need to start getting used to. Having these uncomfortable discussions about race is like clasping your hands the opposite way: It is uncomfortable but the more you do it the easier it will be.

I am currently reading White Fragility again and I am surprised it was so difficult the first time. How could I have let these statements of the truth upset me so much? I recently called my sister and apologized to her for me being so averse to difficult conversations and thanked her for being patient with me and always encouraging me to grow. My comfort with race discussions has grown, but I know that I am nowhere close to the end of the journey. I know that I need to become anti-racist, and I don’t know how to do that yet.

I challenge you all to continue to educate yourselves about the manifestations of racism and get uncomfortable. Keep challenging yourself to be more aware of your privilege than you were yesterday. Keep those hands clasped the wrong way until you become ambidextrous and find that you actually prefer it that way. Keep your hands clasped the wrong way until you never want to go back. Keep them clasped the opposite way until uncomfortable conversations about race become the norm of every dinner table and you too look back and wonder how you ever liked it clasped the first way. We need to end our blind complicity in racism in order to find a path to end it. Thank you.

END_OF_DOCUMENT_TOKEN_TO_BE_REPLACED

END_OF_DOCUMENT_TOKEN_TO_BE_REPLACED
« Older Entries
Manage Cookie Consent
To provide the best experiences, we use technologies like cookies to store and/or access device information. Consenting to these technologies will allow us to process data such as browsing behavior or unique IDs on this site. Not consenting or withdrawing consent, may adversely affect certain features and functions.
Manage options Manage services Manage vendors Read more about these purposes
View preferences
{title} {title} {title}